OCCUPATIONS VERSUS CITY OF CAPE TOWN

The City of Cape Town lodged papers today with High Court in order to collect data on the households living in Cissie Gool House. The aim of the data, from what once can tell, is to estimate the eligibility and means testing of the households living in the occupation. Whilst this might be the outward narrative, the ultimate aim is to demonstrate that the occupation is not about poor and working class, but perhaps occupied by people who may have a steady but working-class income. This is supplemented by the narrative that the occupation has significantly increased crime in the area and is harbouring ‘criminals’ & labelling the occupiers as hijackers. Also, that the households living in there are queue jumping. Ultimately it has boiled down to blaming the victim- that if Reclaim the City had not occupied the building there would be a flourishing social housing programme operational on the site.

Whilst accurate data is critical in any developmental process, so is engagement and dialogue. It is a constitutional right. There is no simple way to put this – the City of Cape Town’s narrative is deeply flawed. Over the years, the decline in the production of housing is startling. Simultaneously the exponential growth in property markets, underpinned by neoliberal policies, has meant more and more people, even those earning at a household income of R15 000 have been subjected to homelessness and evictions. Households are struggling to access bank finance that has been steadily declining for lower segment of the housing market, leaving very little choice for the households, but to move further and further from City Centre, and thereby increasing the cost of living. This is the narrative that matters. Households find Cape Town unaffordable to live- lack of housing delivery, poor transport and economic decline. This data collection process and survey poses many dangers of subjective or biased extrapolations, which need to be expressed and laid out up front.

Inadvertently, the City of Cape Town is taking this matter personally. We don’t have to remind that the City of Cape Town, as an institution, only four years ago announced publicly the release of 11 inner city sites within Cape Town. Since then, all we have heard about this commitment is flawed legal and procurement processes, and often a flip flop whether these projects are moving ahead or not. More recently there are lofty claims that these projects are being implemented soon, but no clear data has been publicly shared with credible commitments to dates, number of sites and units. A passing comment in the press does not translate to concrete and detailed press release for pipeline of projects.

Throughout the last decade the struggle for land and housing has deeply intensified. This is a failure of the housing programmes- and perhaps the same vigour that is being applied to Cissie Gool House, should be applied to reviewing the entire housing programme with the National Department. For instance, the delivery of social housing has been appalling, producing negligible units annually. New social housing companies get formed and collapse in a matter of years, unable to cope with the demands and dysfunctional financial model of social housing. This is an opportunity for City of Cape Town to work with residents of Cissie Good House to critique absurd new aspersions by the President that we need ‘new smart cities’ or by the Minister of Human Settlements ‘that we need rapid land release (inadvertently site and service in the periphery). Is it time the City of Cape Town to say, we need a new paradigm for housing delivery- that protects citizens from evictions no matter their class or race?

Finally, this demand for data goes both ways- if the residents must share their data, then the City should come forward, not in abstractions, but clear dates for delivery of social housing on vacant state-owned parcels. In 2019, ground-breaking ceremony took place on Pine Road site, yet we still hearing vague plans of implementation starting in a few months. We would all like the City of Cape Town to be as committed and transparent about its housing delivery programmes.

DAG as an institution has worked with Cissie Gool House and Reclaim the City over years to develop various solutions that need to be examined for redevelopment. This includes reviewing various forms of property management, tenure arrangements, design options and financing streams. The redevelopment and a new paradigm to housing is entirely possible through the lens of Cissie Gool House. This is the only way to avoid another land and building occupations, is to be developmental and innovative, within the laws of the country. The only solution left is for a comprehensive dialogue between City of Cape Town and residents of Cissie Gool House. No form of eviction is going to solve this problem, but rather feels like kicking the can until the same housing crisis emerges in another crevice in the City.

Rather than blaming the victim, this is an opportunity for the City of Cape Town to show that it truly cares.

Established in 1986, the Development Action Group (DAG) is a leading non-profit, non-governmental organisation. DAG’s mission is to create, implement and support community-centred developments in order to address economic, social and spatial inequalities. DAG has been at the forefront of urban development initiatives for more than 30 years. 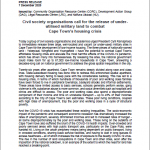 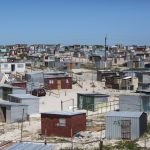