The State of Land Release in South Africa

In November 2020, the national Department of Human Settlements, Water and Sanitation announced with great fanfare that the government will no longer prioritise building houses for qualifying applicants, but instead focus its interventions on providing serviced land which people can use to build their homes themselves. The reprioritisation is ostensibly a response to the call for land made by the landless as well as enterprising individuals unwilling to languish on ubiquitous and obscure housing waiting lists. Moreover, the shrinking housing budget and at that, a significant part of the fiscus having to be diverted towards the country’s COVID-19 response has made continued provision of subsidised housing unsustainable.

There is little information or evidence in the public domain with regards to this shift, which has left civic bodies and communities/potential beneficiaries with more questions than answers. Mostly, the absence of a clearly defined policy and implementation strategy makes it difficult to assess the extent to which government has thought through the new approach. There are numerous concerns that require clarity and further discussion, either through policy or an engaging and meaningful public participation process.

The government has acknowledged that it faces several challenges with upgrading informal settlements, indicating that it is a costly and slow process that can take up to seven or eight years to reach completion. Consequently, greenfields projects that take up to three years are preferred. A major problem with most greenfields projects, however, is that they perpetuate existing spatial disparities given their poor location and poor accessibility to economic opportunities. In part, this is due to the challenges municipalities experience in accessing and pipelining well-located land for human settlements.

What then is the potential of the site and service model to accelerate efforts to address growing informality, particularly with the imperative of achieving more spatially equitable and inclusive neighborhoods as a core objective? At face value, the new policy direction has possibly far-reaching consequences, with the potential to fast-track access to land for the landless and households in desperate need of secure tenure and decent accommodation. Read more… https://blog.planning4informality.org.za/home/blog/18 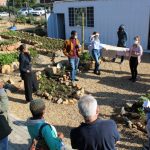