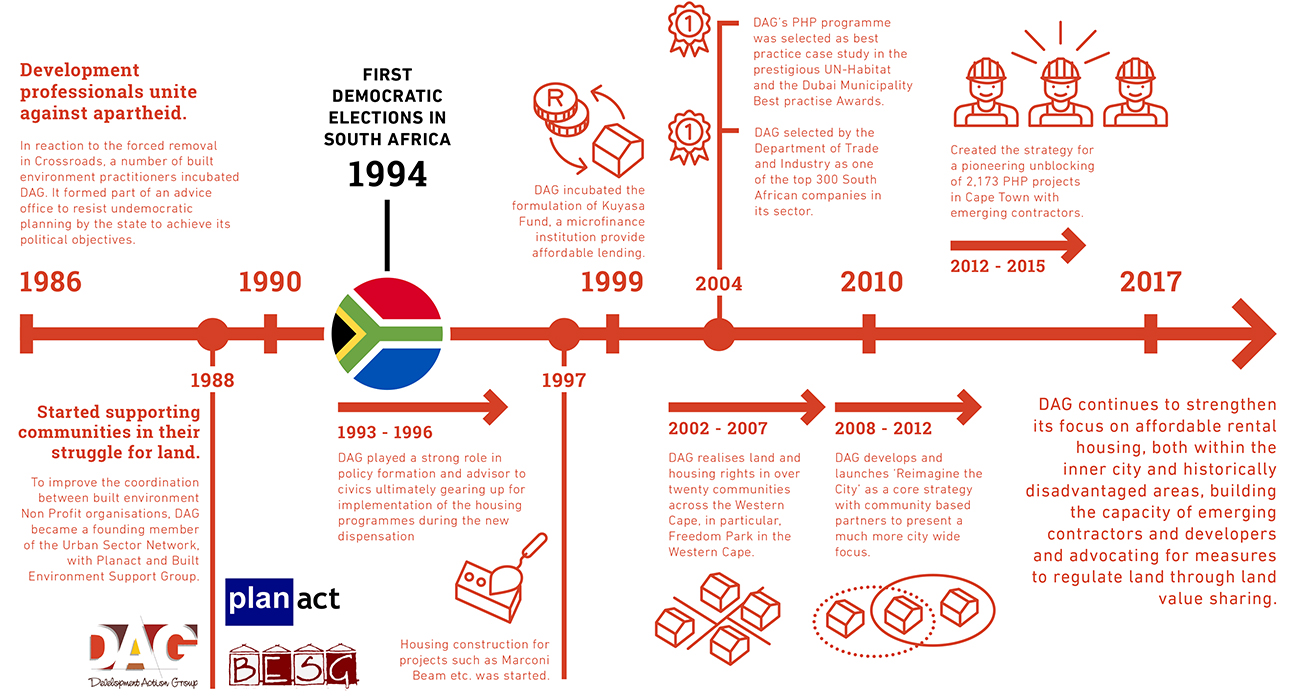 Development Action Group (DAG) was initiated by a group of activists in response to the destruction of and forced removals from Crossroads, an informal settlement in Cape Town, in 1986. This group gradually formalised into a leading, well-established and respected non-government organisation through working with various marginalised communities in the Western Cape, especially in the urban and human settlement sectors. It is currently governed by a Board of Directors as a Section 21 Company (established in 2003).

Over time DAG was increasingly asked to assist communities with accessing land, housing and tenure rights, among other basic human rights. As a founding member of the former national Urban Sector Network (USN) in 1988, DAG continued to be involved in issues of housing, urban development and local government, working on projects located throughout the Western Cape and on advocacy issues at a national scale.

By the early 1990’s DAG’s work shifted from tenure struggles to include poor people’s rights to participate in planning and developmental processes. During this period DAG established itself as a facilitator of development processes. By the mid-1990s DAG’s policy and research activities were well established – focusing on urban and regional planning studies – and the organisation was actively involved in the National Housing Forum through the USN where new housing policy was being developed. DAG’s work grew to include a variety of training programmes, partnerships with communities and several housing projects as well as with informal settlement upgrading projects in the Western Cape Province.

DAG has been an incubator for innovative urban sector initiatives such as the KUYASA Fund.

1999 DAG successfully established the KUYASA Fund, a microfinance organisation, to promote savings and provide micro-loans to the poor to support incremental housing processes through home improvements. This was to prove to banks that the poor are credit-worthy even if they lack formal-sector payslips or assets. The Fund now exists as a separate entity to DAG and challenges traditional banking thinking by adopting an innovative approach to end-user finance. Since 2000, when it granted its first loan to Khayelitsha resident Rose Siyanga, the Kuyasa Fund has been successfully building equity by providing housing loans to individuals. In so doing, it has changed the lives and improved the living conditions of more than 51,900 people that come from poverty-stricken backgrounds. For more information about Kuyasa Fund visit its website at www.thekuyasafund.co.za or telephone +27 (0)21 448 3144.

DAG has been instrumental in developing participatory housing strategies and plans, most notably the Western Cape Sustainable Human Settlements Strategy, in 2007. Between 2007 and 2009 DAG was represented on the task team to develop the enhanced People’s Housing Process (PHP) policy with the National Department of Housing. DAG is still represented on the task team to drive critical recommendations for the effective implementation of the PHP policy and formulation of guidelines. DAG has been elected as land and housing team leader nationally in this process.

DAG has a long track record in the urban sector with tangible results: 5,550 new houses built in people-driven projects with DAG’s support; direct assistance in securing land, infrastructure, housing and community services to more than 100 000 people in over 60 projects; the training of more than 2000 people from poor and marginalised communities in various aspects of housing and the production of more than 85 publications and other visual materials. DAG’s successful training programmes have reached provincial and local government officials in eight of the nine provinces of South Africa.

In 2008, following 14 years of active engagement in a transitional urban development and housing context, DAG paused to reflect upon its focus, direction and achievements to date. This moment of pause and reflection led to a strategic organisational shift that moved DAG beyond its largely project-based housing focus since 1994 towards a new urban agenda based on notions of a “new urban order” and theme that focused on a “Re-imagined City”. This trajectory was underpinned by an organisational emphasis on building democratic urban governance and new structures (“urban forums”) while, at the same time, consolidating DAG’s long history and track record in facilitating the delivery of community-driven affordable housing.

Key milestones along the DAG journey between 2009 and 2012 towards “a new urban order” and more democratic urban governance include: the co-hosting of the “Re-imagining the City” Conference in October 2010; the re-design and alignment of the DAG Community Leadership Programme (CLP) as an action-learning initiative; the successful co-hosting of a public meeting in June 2012 with 25 community partners involved in the CLP at the Good Hope Centre; the development and adoption of a Citizen’s Charter by more than 900 participants at the June 2012 Public Meeting; the drafting of a Concept Paper for a National Human Settlements and Urban Forum for the Department of Human Settlements, adopted by the latter in 2012; and establishment of an emerging network of CBO leaders from a range of largely informal settlement dotted across the Cape Metropolitan Area committed to the emerging DAG vision of a re-imagining Cape Town.

DAG continued to consolidate its role as a leader in PHP housing delivery when awarded a contract by the Western Cape Department of Human Settlements to undertake a large PHP Unblocking Project across a range of targeted areas in Khayelitsha. The scale and three-year timeframe for this housing project offered DAG a unique opportunity to demonstrate a housing construction and delivery approach as well as an emerging model that integrates a range of social investment strategies into a traditional PHP housing construction project. This innovative cost-recovery PHP Unblocking Project has the potential to become a replicable model of approach for other blocked PHP housing projects in Cape Town and elsewhere. It is receiving increasing attention and interest from the Department of Human Settlements (national and Western Cape) and from as far afield as the Eastern Cape.